Posted at 21:12h in Uncategorized by Angel Shannon 0 Comments
0 Likes
The first time I met Grace she was sitting in the music room, her eyes closed, her lips quivering to the lyrics of “Be Thou My Vision.” It was late afternoon, the time the nursing assistants felt it would be best for me to see Grace, before her behavior changed and she refused any company. Grace had fired her doctor, whom she’d known for more than 25 years but no longer recognized. She also fired the next doctor, with whom her daughter had worked for 15 years and Grace had sat next to at her daughter’s wedding. And she had fired the nurse practitioner who specialized in geriatric care and with whom she seemed to have made a connection, convinced that her husband Roger and the rest of the family were plotting to get rid of her and leave her to die in the assisted living facility against her will.

A Fall for Grace

On the surface, Grace’s story was not unlike so many I’d heard before. A retired accountant with the federal government, she had been living at home with her husband, a university professor, before an unexpected ice storm caused her to slip, fall, and break her hip. Her daughter Marianne, an administrator at the university hospital, knew exactly whom to call upon for her surgery. Everything went well, and Grace’s wound healed quickly. Anxious to get back to her gardening and volunteer work at her parish, Grace agreed to a short stay in rehab and was usually up and ready to walk before the physical therapists even arrived at her room. 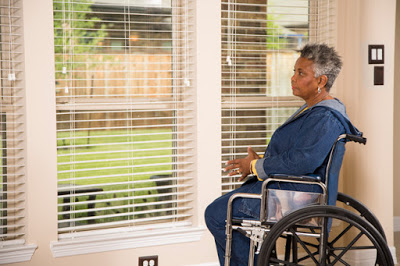 But it was one morning that Grace was not up and ready that the nursing assistants found unusual. She was disoriented, disheveled, argumentative, and nearly combative. Grace had a urinary tract infection that, as it often does with older adults, affected her ability to think clearly. A round of antibiotics was all it would take, so the doctors promised. She’d be back to herself in no time, and soon she’d be able to go home.

What no one knew—other than Roger and Marianne—is that Grace would not go home. Not even a week before her fall, Roger and Marianne had spoken about Grace’s unusual behavior. She had accused Roger of taking her checkbook from her purse when, in fact, she’d left it on the dining table the night before. She had written a check for $5,000 to the lawn service and then fired them, accusing the owner of trying to steal from her account.

Roger had not told his daughter that it wasn’t really the ice that had caused her mother to fall. She had also fallen in the middle of the night, right outside her bathroom. As a matter of fact, Grace had fallen three other times, each time trying to get to the bathroom, only to forget how she had gotten there. Even at the rehab, although the nurses had laughed it off and chalked it up to her wry sense of humor, Grace had said Roger was not really her husband but a federal agent who needed to be IDd before coming on the unit.

Now, my job was to connect to Grace and convince her to take her medications, particularly one she had taken for many years for anxiety and mild depression. It had taken weeks and several rounds of antibiotics to clear up Grace’s infection but her memory seemed worse, and it was clear from a series of neurological and psychological tests that it was exactly as Roger and Marianne suspected. Grace had dementia.

I started things off as I always do.

“Hello, Grace. My name is Angel,” I said, extending my hand. “May I sit and talk to you for a moment?”

“What do you want? Who are you, anyway?”

“My name is Angel. I’m wondering if I can talk to you for a few minutes?”

Grace sealed her eyes shut, clenched her fists tighter, and pressed her shoulders in toward her chest. I told Grace why I was there, choosing first to let her know I was a nurse practitioner and that I was there to check on how she was feeling—her appetite, her sleep, her mood.

“How do you think I feel?” Grace spat. She leaned forward, the skin on her knuckles turning pale white. “How would you feel if you were me?”

“I’m not sure how I would feel, Grace. But what I want to know, really, is how you feel.”

Give or take a few details, much of what Grace shared with me that day was true: No one had ever really told her she wasn’t going home from the rehab. Roger and Marianne had taken the facility tour by themselves and decided that, since it was on the side of the Beltway nearest to Marianne’s office and not too far from Roger’s, it would be convenient for both of them.

The view at night from Grace’s room was picturesque. The small but beautiful assisted living facility was costing Roger a pretty penny, but, after 35 years of marriage, he knew the sacrifice he was making for his wife was worth it. It was also true that Roger had spoken to Miriam—Grace’s best friend—because he had been so distraught about what to do. But what wasn’t true, and what Grace was convinced of, was that Roger had “dumped” her there and was having an illicit affair with Miriam; that Roger was taking her retirement money and spending it on fancy overseas vacations for himself and Miriam; and that the medications I was there to convince her to take were coming out of her life savings, all for the sake of getting her out of the way of Roger and Marianne. Grace had all but stopped speaking to Roger. When he came, she just sat quietly in the day room, ignoring his every word.

In geriatric practice, we often quip about always having at least two patients: the person we are there to care for and the relative or family unit to which they belong. Our work is part detective, deciphering what is fact and what is perception, and part historian, wading through family histories that are often messy, convoluted, and very complicated. We are the insider and the outsider all at once, paying close attention to little nuances that don’t often make clear which side of the fence we should be on for any given day. We are also the bearer of news that, many times, isn’t good. People get older. Body parts stop functioning. Diseases set in and get worse over time. Cures don’t always happen. Hope falls short, and expectations crash to the ground. Anger is quick and acceptance slow, especially in cases of dementia.

What most people don’t know—and what many providers have difficulty explaining—is that dementia changes the brain in ways clinicians can rarely predict. It changes the ability to complete not only the ordinary functions of bathing and toileting and walking, it can also create drastic changes in mood, behavior, and personality. In addition to struggling with the mechanical tasks of caring, caregivers grieve the loss of the person and personality they used to know. For some, like Roger, the changes become unbearable over time.

Getting Grace to take her medications had less to do with talking to Grace than it did with talking to Roger. Because her behavior was so emotionally taxing, Roger had given up on coming to see her. My work was not only to manage Grace’s medications but to help Roger understand the full scope of her illness and how his presence alone might help. He understood parts of the science; where he needed help was in understanding his emotions.

“Holding space” for caregivers is as important as the work we do for our patients; in fact, it is central. In holding space, we strengthen caregiver coping skills by helping them process feelings of anger, frustration, and fear. We help normalize emotions, clarify perceptions, and set realistic expectations for what we know is likely to come. Most of all, we help caregivers learn how to honor the difficult.

My conversations with Roger led to creation of a new visiting schedule at an earlier time in the day when Grace was far more rested and less likely to be tired, irritable, and suspicious. His visits would be brief and focused.

Under the new arrangement, Roger became increasingly helpful to the nurses during the morning medication time. Roger and Grace shared meals together and morning coffee, activities that hadn’t been erased from Grace’s memory. Grace loved art, so we devised a calendar art project that involved cutting, pasting, and coloring, which gave her a goal and kept her busy in the same way her work as an accountant had.

Her condition did deteriorate over time, but, by then, she, Roger, and Marianne had accepted hospice and palliative care, and Grace was able to live her final few days back at home. There were days she still refused her medication, something we all learned to accept. And that, I’ve found, is the essence of geriatric practice: providing care through acceptance; making peace with even the smallest and slowest of progress even as the end of life looms near. It’s learning to honor the difficult.

First published on Is there An NP in the House?  a professional nursing blog owned by the Honor Society of Nursing, Sigma Theta Tau International, Copyright, October 2015.